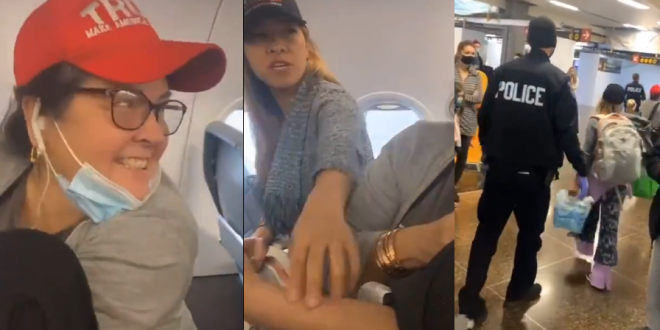 A disturbing video that went viral on TikTok shows a Trump supporter repeatedly using the n-word and refusing to wear a mask on a flight. She and another person wearing Trump caps were then removed from the flight.

The video shows a woman wearing a MAGA hat with her mask down. She and at least one other woman aren’t wearing masks in the video, and the flight attendant informs them that they will have to leave if they don’t wear them.

Then the anti-masker says “have a good day, n***” at least three times to a Black passenger as she walks by. The pair are then shown being thrown off the flight.

In video shared on TikTok by Alex Barkley, the women were on a Frontier Airlines flight from Seattle to Denver last month. The pilot is heard over the intercom saying that, because the ladies had refused to leave the aircraft, everyone would be forced to deplane.

The pilot continues: “The two passengers who we need to remove from the airplane are refusing to do that. We can resolve this easily but at this point I have to ask everyone to leave the airplane.” Upon this news, the other passengers groan and sigh. “Take your IDs and your boarding passes,” the pilot says.

“You can leave your personal belongings if you’re gonna reboard. Please do not get involved in the altercation or you will not reboard.”

Perhaps obviously, the women wore initially wore their masks in order to board the plane to conduct their stunt.

Trump supporters use the n-word after refusing to wear masks on a plane pic.twitter.com/VwBCnclOcW

Previous Trump: Remember I “Ended Obamacare” (He Did Not)
Next Pelosi Faces Difficult Vote For House Speakership