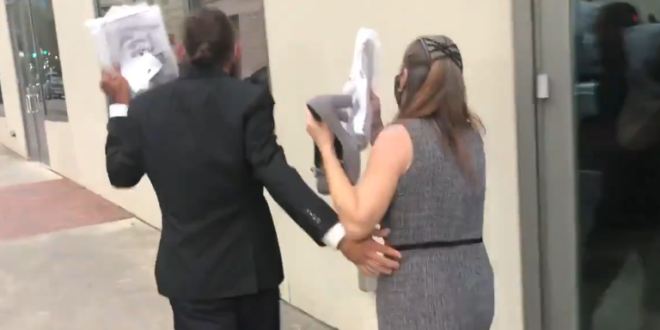 A Middleburg man and his girlfriend sprinted out of a federal courthouse Tuesday to avoid questions from reporters after being charged in the DC riots. Dana Joe Winn, 45, and his 40-year-old girlfriend Rachael Lynn Pert, allegedly drove to Washington DC to participate in the January 6 insurrection at the Capitol.

Each defendant faces two charges: Unlawful entry on restricted buildings or grounds, and violent entry and disorderly conduct on Capitol Grounds. The first charge carries a penalty of up to one year in prison and a $100,000 fine. The second charge includes six months in prison and a $5,000 fine.

Conditions of their bond include wearing an ankle monitor, they cannot live with each other, they cannot discuss the facts of the case and cannot travel anywhere outside the Middle District of Florida.

ARRESTED: Rachael Lynn Pert, 40, assistant manager at a Circle K convenience store in Middleberg, Florida must wear an ankle monitor, live apart from boyfriend Dana Joe Winn & not use alcohol or drugs. After release, she runs from @RyanANJax. pic.twitter.com/U3gpeqUWhU