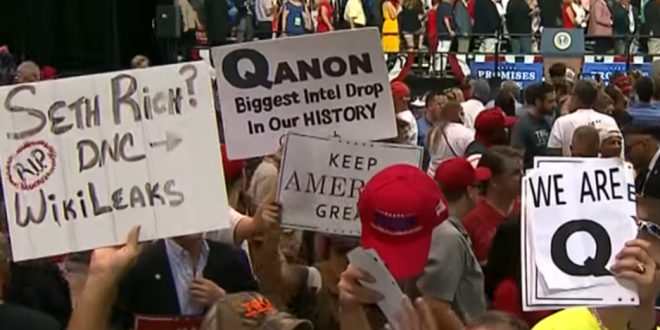 As social networks and app stores crack down on disinformation purveyors and calls for violence, QAnon-based lies and conspiracy theories have found a new way to go viral: forwarded text messages. The messages have already made their way to some prominent conservatives, who have amplified them on social media.

One viral false conspiracy theory shared across the U.S. implores users to disable automatic software updates on their cellphones, claiming that the next patch will disable an emergency broadcasting system message from President Donald Trump.

The false rumors are usually attached to another urban legend about a blackout coming in the next two weeks, which say people should be “prepared with food and water.”

You might’ve received a text message from a loved one saying not to update your iPhone because it’ll disable your Emergency Broadcasting System.

This is not remotely true. It’s a QAnon conspiracy theory, and it’s everywhere since the Parler shutdown.https://t.co/G17tREW3Pp

The viral text rumor is that you need to stock up on supplies because there’s a “blackout” coming.

What your friend who texted you may not tell you is that this is a QAnon rumor, pushed by people who think Trump is about to take over the country.https://t.co/G17tREW3Pp pic.twitter.com/FxUcPmP5uO

Since the deplatforming, QAnon viral texts have taken off, including a cheapfake that features a series of mashed-up speeches by Trump, realigned to lead the viewer to falsely believe the president is calling for an uprising on Jan. 20.https://t.co/G17tREW3Pp

The weird thing about this story is the variation. I’ve seen so many concerned parents, siblings, friends, all taking the text message and adding their own spin to this QAnon conspiracy theory.

They’re sincerely worried about a blackout because of one vague text message.