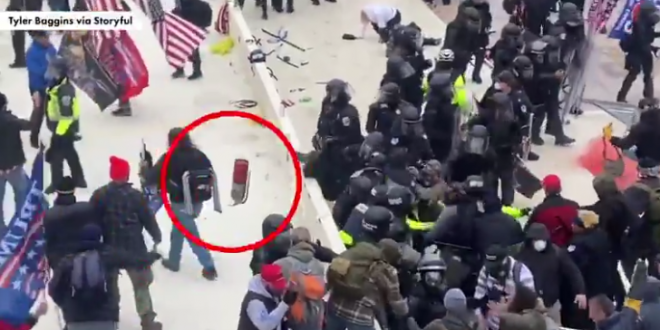 Dramatic new video shows the moment a US Capitol rioter hit an officer in the head with a fire extinguisher during Wednesday’s chaotic siege.

The footage obtained by Storyful from Wednesday’s siege shows droves of violent demonstrators storming past a barricade as US Capitol Police desperately tried to keep them corralled on the west side of the building at about 2:30 p.m.

“They broke through, it’s on!” one man is heard yelling as the chaotic clip begins. The rioter who tossed the fire extinguisher appeared to walk away after heaving it at the helmeted officers from above — making an audible thud as it crashed to the ground.

The above-linked post notes that it’s presently unknown whether the cop struck in the video is the one who died after being beaten with a fire extinguisher. Watch the clip.

Urgent, please surface more footage of this unidentified male seen throwing a fire extinguisher at a group of #CapitolPolice.