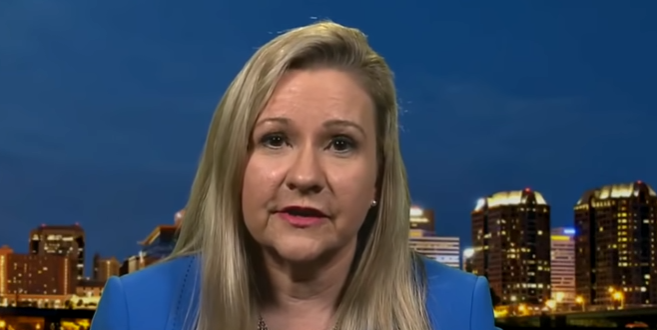 The Virginia Senate has voted to censure Sen. Amanda Chase (R-Chesterfield) following her involvement in the rally-turned-insurrection at the United States Capitol. SR91 passed in a bipartisan vote of 24-9 on Wednesday.

“Since taking her oath in 2016, Senator Amanda Chase has over and over again engaged in behavior unbecoming of a Senator. She propagated conspiracy theories; lied to her constituents, followers, and colleagues; praised those who espoused racist and anti-Semitic sentiments; and on many other occasions brought disrepute upon herself, and by extension, the Senate of Virginia. Senator Amanda Chase’s conduct had to be held accountable, and that’s what we did today,” Majority Leader Dick Saslaw (D-Fairfax) said.

In long, sometimes angry remarks before the vote, Chase, who is seeking the GOP nomination for governor, accused fellow senators of trying to humiliate her. She suggested that if censure were approved she would take the body to court.

But other GOP lawmakers said they felt compelled to act. Senate Minority Leader Thomas Norment (R-James City), one of three Republicans to vote for censure, said the issue was one of “hypocrisy” on Chase’s part and a lack of integrity.

Chase has describe herself as a version of former President Donald Trump “in heels.” She suggested after the Jan. 6 riot that left-wing “antifa or BLM agents of destruction” were really to blame — an assertion that contradicts the evidence.

Read the full article. Chase last appeared on JMG in late December when she called on Trump to invoke martial law. She is running for governor.

This censure is nothing more than a politically driven attack because I’m the front runner for Governor both in funds raised; beating former Speaker Cox, and largest social media presence in Virginia. https://t.co/R6exi3zmzD