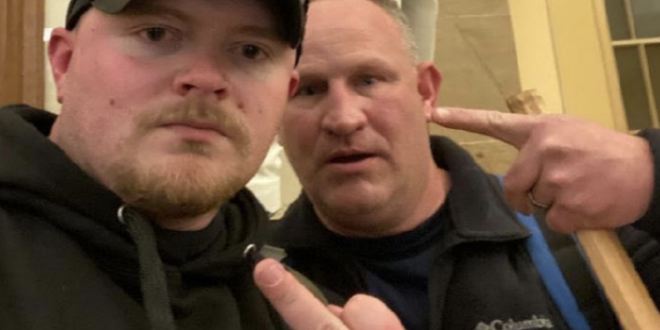 Two off-duty Rocky Mount, Virginia police officers were charged yesterday in federal court in the District of Columbia in connection with the riots at the U.S. Capitol on Wednesday, Jan. 6, 2021.

Jacob Fracker and Thomas Robertson were charged by complaint with one count of knowingly entering or remaining in any restricted building or grounds without lawful authority and one count of violent entry and disorderly conduct on Capitol grounds.

Both defendants were arrested on January 13, 2021, in Virginia. It is alleged that during the events at the U.S. Capitol, Fracker and Robertson were photographed in the Capitol building making an obscene gesture in front of the John Stark statue.

On social media, Robertson is quoted as saying, “CNN and the Left are just mad because we actually attacked the government who is the problem and not some random small business … The right IN ONE DAY took the f***** U.S. Capitol. Keep poking us.”

He also stated that he was “proud” of the photo on an Instagram post that was shared to Facebook, because he was “willing to put skin in the game.”

On Facebook, Fracker posted a comment that read, “Lol to anyone who’s possibly concerned about the picture of me going around… Sorry I hate freedom? …Not like I did anything illegal…y’all do what you feel you need to.” The post has since been deleted.

Two off-duty Virginia police officers who allegedly took part in the attack on the US Capitol —and took selfies during the riot — are now facing federal chargeshttps://t.co/EvL1eqSKog

Previous Widow Of Rep-Elect Who Died Of COVID To Seek Seat
Next Cawthorn: “I Was Armed” During Capitol Riots