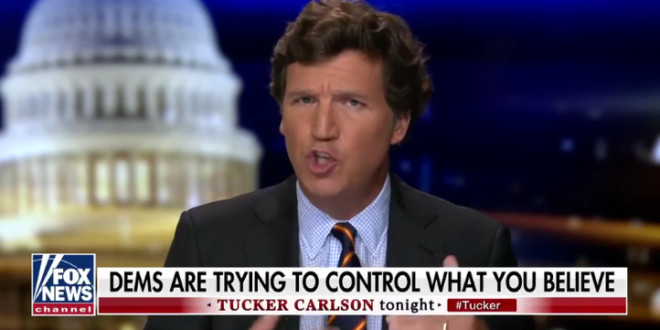 Listen as the geniuses explain how the single biggest threat to this country isn’t Chinese hegemony or even the coming hyperinflation, pretty much a certainty now which was 100% caused by elite mismanagement of our economy. But no let’s not talk about that. The real threat is a forbidden idea, something called QAnon.

No democratic government can ever tell you what to think. Your mind belongs to you and it is yours and yours alone. Once politicians attempt to control what you believe they are no longer politicians they are by definition dictators. And if they succeed in controlling what you believe you are no longer a citizen, you are not a free man, you are a slave.

According to Tucker, if the media says it’s crazy to believe that Democrats run an international Satanic cabal of pedophile cannibals, that means government is taking away your freedom of thought.

That’s what America’s uncles are hearing tonight. And tomorrow. And the next day. https://t.co/O9GAazrs28

Tucker Carlson crosses the line into full-out QAnon pandering. He and Fox want this audience. https://t.co/KtrtM4wdkR