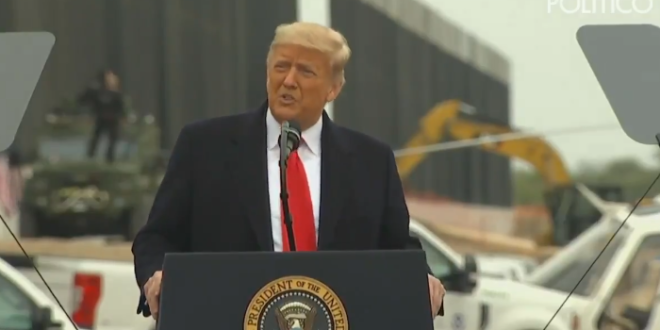 Trump: “The 25 Amendment Is Of Zero Risk To Me But It Will Come Back To Haunt The Biden Administration”

“I’d like to briefly address the events of last week. Millions of our citizens watched on Wednesday as a mob stormed the Capitol and trashed the halls of government. As I have consistently said throughout my administration, we believe in respecting America’s history and traditions, not tearing them down,” he said.

The president dismissed any possibility that Vice President Pence and half his Cabinet would invoke the 25th Amendment to force him out of office before his term ends in just over a week, something Democrats are pushing for on Capitol Hill.

“The 25th Amendment is of zero risk to me, but will come back to haunt Joe Biden and the Biden administration,” Mr. Trump said, without saying why. “As the expression goes, be careful what you wish for.”

“We can’t let the next administration even think about taking it down,” Trump says about his border wall. Also makes rare direct acknowledgement of Biden’s win, saying 25th Amendment “is of zero risk to me, but will come back to haunt Joe Biden and the Biden administration” pic.twitter.com/1DootBW2JQ

WATCH: ‘The #25thAmendment is of zero risk to me,’ US President Donald Trump claims ‘free speech is under assault’ amid calls for his removal from office pic.twitter.com/ptvQEy0K9X