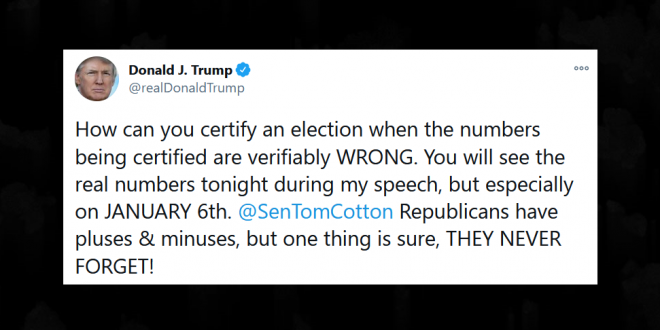 Republican Sen. Tom Cotton of Arkansas said in a statement on Sunday that he would not join some of his colleagues planning to challenge President-elect Joe Biden’s win by opposing the certification of the Electoral College vote on Wednesday.

Cotton, a supporter of President Donald Trump, said attempts to overturn the Electoral College would exceed Congress’ power under the Constitution, which gives states the power to run elections and courts the power to settle election disputes.

How can you certify an election when the numbers being certified are verifiably WRONG. You will see the real numbers tonight during my speech, but especially on JANUARY 6th. @SenTomCotton Republicans have pluses & minuses, but one thing is sure, THEY NEVER FORGET!

This is another threat from trump to a Republican revolving around lies. Stop this madness.

Trump attacks Tom Cotton, one of his most loyal supporters, after Cotton said: “If Congress purported to overturn the results of the Electoral College, it would not only exceed that power, but also establish unwise precedents,” saying doing so would “take away” the power of ppl https://t.co/VY6hXCBEsb