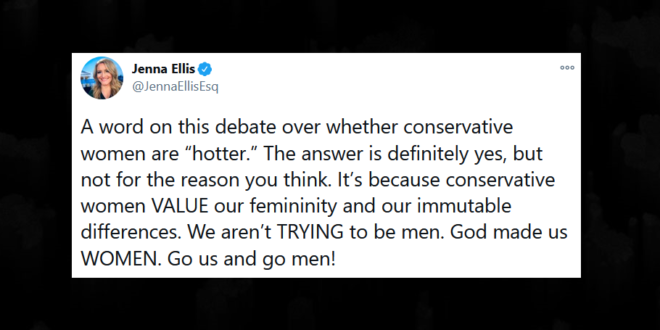 Jenna Ellis, Trump lawyer and self-avowed Christian, was recently exposed for lying about her termination from a Colorado county’s district attorney’s office and for having invented most of her resume.

Last night she took at potshot at the appearance of Biden press secretary Jen Psaki, implying that Psaki is trying to look like a man.

Ellis’s tweet was in response to an attack on Psaki’s appearance by homocon troll and “Walk Away” leader Brandon Straka, whose group was just banned by Facebook for lying about the election.

Straka, an alleged hairdresser who was recently put on American Airlines’ no-fly list for staging a face mask incident, regularly attacks the appearances of his critics while at the same time screaming that the left refuses to dialogue with him.

A word on this debate over whether conservative women are “hotter.” The answer is definitely yes, but not for the reason you think. It’s because conservative women VALUE our femininity and our immutable differences. We aren’t TRYING to be men. God made us WOMEN. Go us and go men! https://t.co/XGsrr9ljHH

If the reaction to this tweet from blue checks is any indication, this is going to be the greatest 4 years on social media EVER.

And worth noting- I’ve had at LEAST 7 blue check reporters come after me to defend the Democrat press secretary. This tweet clearly spread around the “journalist” circuit & they all sprang to action. Why? Because they’re not reporters. They’re liberal activists.

My second-most recent tweet from @BrandonStraka, who today says he wants to have “conversations with Biden voters.” pic.twitter.com/IRWzCdq6M0