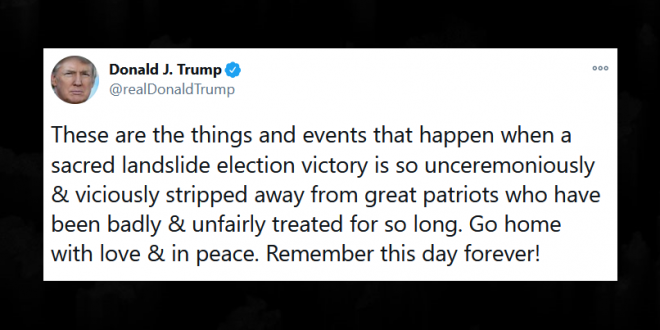 Trump Defends Extremists: You Made Them Do This

A woman died from injuries after she was shot inside the US Capitol Building as pro-Trump supporters tried to break into the House Chamber, according to the Associated Press. It is not known yet what exactly led to the woman being shot, but a photo from CBS News’ Zak Hudak shows law enforcement with guns drawn inside the House Chamber around 2:46 p.m.

US Park Police, DC Police and National Gaurd troops have worked to move Trump supporters and rioters gathered at the steps of the US Capitol Building to create a safety perimeter. Due to the violence at the US Capitol Building, DC’s Mayor Muriel Bowser announced a curfew from 6 p.m. Wednesday to 6 a.m. Thursday for people inside Washington’s jurisdiction.

These are the things and events that happen when a sacred landslide election victory is so unceremoniously & viciously stripped away from great patriots who have been badly & unfairly treated for so long. Go home with love & in peace. Remember this day forever!