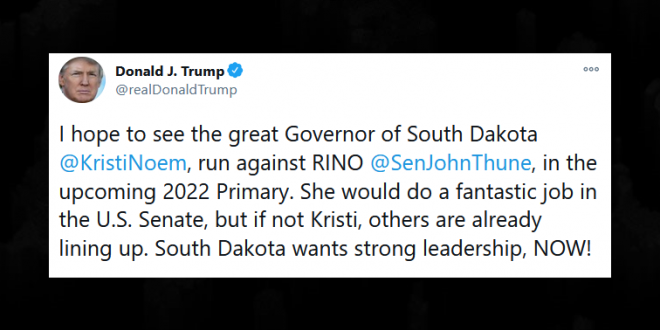 From the right wing Washington Times:

President Trump on Friday encouraged South Dakota Gov. Kristi Noem to launch a primary challenge in 2022 against Sen. John Thune, the No. 2-ranking Republican in the U.S. Senate.

Mr. Trump said last month that Mr. Thune – who the president called “Mitch’s boy” – will be primaried in 2022, though he didn’t offer specific potential challengers.

Mr. Thune likely earned the president’s ire for saying that House Republicans’ push to challenge the Electoral College results on Jan. 6 would go down like a “shot dog” in the Senate.

I hope to see the great Governor of South Dakota @KristiNoem, run against RINO @SenJohnThune, in the upcoming 2022 Primary. She would do a fantastic job in the U.S. Senate, but if not Kristi, others are already lining up. South Dakota wants strong leadership, NOW!

Sen. Thune on Trump going after him and saying he’ll support a primary challenger: “finally, an attack tweet. What took him so long? It’s fine it’s the way he communicates. I’m not sure what I did to be deserving of all that.l

Our agency will help any candidate looking to oust Sen. Thune. We want anyone not supporting Trump the hell out of office.