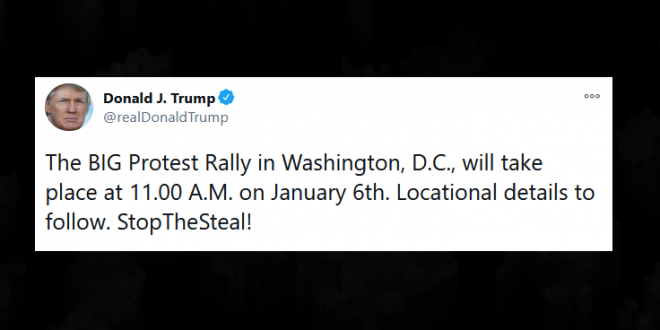 A city accustomed to mass protests is gearing up for especially intense ones over what should be the most mundane of political events: the counting of Electoral College votes during a special joint session of Congress.

At the urging of President Donald Trump, however, die-hard supporters are planning to descend on the nation’s capital Jan. 6, to pressure Republican lawmakers into aligning themselves with the doomed effort to overturn Joe Biden’s electoral victory.

Knife fights, shouting matches, and verbal harassment of Trump opponents accompanied previous demonstrations following Biden’s election win in November. Now federal and local law enforcement are bracing for what may be the most intense Trump protest yet.

One of the sites launched to organize the rally is Wild Protest, at which you’ll find a cavalcade of crackpottery and extremist leaders.

The BIG Protest Rally in Washington, D.C., will take place at 11.00 A.M. on January 6th. Locational details to follow. StopTheSteal!

We will be celebrating President Trump’s MASSIVE victory and 2nd term!!

I highly discourage people from going to https://t.co/FrdIF5SFYD and signing up to attend on 1/6 with fake names, emails, and phone numbers. Please don’t do this. pic.twitter.com/NOdblwthUQ

Previous Gohmert Filing Claims Pence Has Power To Decide The Winner, Otherwise He’s Just A “Glorified Letter-Opener”
Next Christianists Again To Blow Horns And March Around US Capitol Seven Times So That Jesus Will Stop Joe Biden