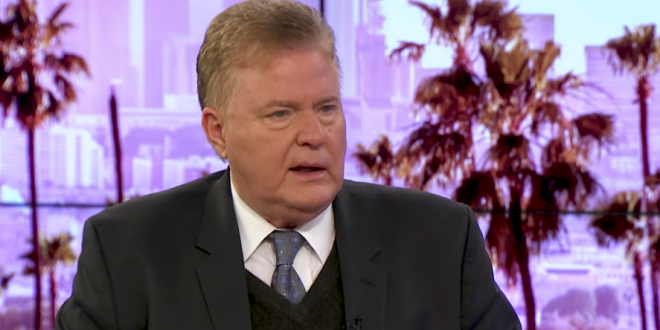 TODAY: Christianists To March Around Georgia Capitol Seven Times So Jesus Will Stop Dems From Winning

With the high-stakes Georgia Senate runoff elections just days away, a prayer march is set to take place in the state’s capital and largest city of Atlanta on Saturday. Chaired by Bishop Wellington Boone of Atlanta and Jim Garlow [photo] of San Diego, California, the Georgia Prayer March will take place at the Georgia Statehouse on Saturday from 11 a.m. to 2:30 p.m. It will also be streamed live online for those who want to attend virtually.

“Like the scriptural story when the walls came down, we will march around the Georgia State House, praying that any unbiblical policies come down and God’s Ways are exalted.” Participants will march around the Georgia Capitol seven times. The event is open to all followers of Jesus Christ who care “deeply about biblical values including the sanctity of life in the womb, the sacredness of one man-one woman marriage, the scripturally-based free market system and supporting Israel.”

Read the full article. As I reported yesterday, a similar march will take place at the US Capitol on January 6th. Longtime JMG readers will recall Jim Garlow as one of the most vicious anti-LGBTQ activists and as the co-author of the anti-LGBTQ Manhattan Declaration.

Previous Trump: The GA Senate Runoffs Are “Illegal And Invalid”
Next Trump: Remember I “Ended Obamacare” (He Did Not)