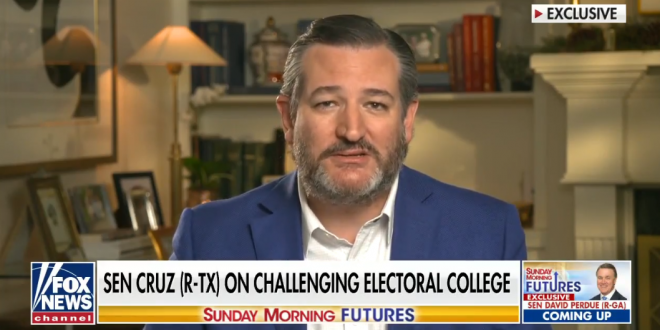 Sen. Ted Cruz on Sunday condemned those attacking him for his challenge to the certification of the presidential election, saying they were using “angry language.” Speaking on Fox News’ “Sunday Morning Futures With Maria Bartiromo,” the Texas senator responded to his critics on both sides of the aisle.

“I think everyone needs to calm down,” he said. “I think we need to tone down the rhetoric. This is already a volatile situation. It’s like a tinderbox and throwing lit matches into it and so I think the kind of hyperbole we’re seeing, the kind of angry language.”

He said that some Democrats had accused him of “treason.” Cruz said that challenging the results of the election was not an ideal thing for Congress to be doing, but that it seemed better to him than merely accepting the results. “Frankly, two pretty lousy choices,” he said.