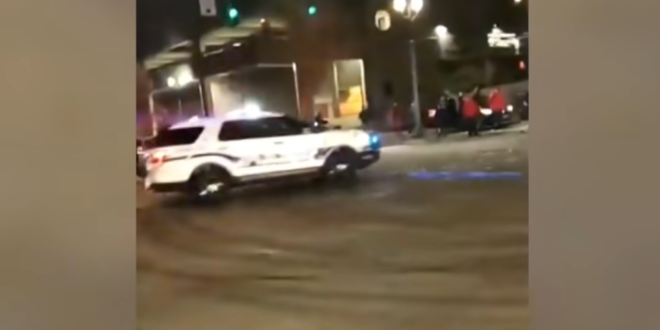 The video footage is clear, and hard to watch: a Tacoma Police patrol car running into and through a group of pedestrians. The 48-second clip, shot shortly before 7 p.m., was shot in the downtown area.

The patrol car, surrounded by groups of shouting people, revs its engine and suddenly surges forward, striking the group and running over at least one individual before driving on. The officer backed up about three feet and then suddenly accelerated forward, striking several people and knocking four to five of them to the ground.

It appears the vehicle then drives over something, or somebody. Another video from the same scene and posted to Twitter appears shows the vehicle driving over a person on the ground.

From the Tacoma Police:

Tacoma Police officers responding to the location began clearing the intersection of vehicles and people for the safety of those gathered and people trying to use the street. During the operation, a responding Tacoma police vehicle was surrounded by the crowd.

People hit the body of the police vehicle and its windows as the officer was stopped in the street. The officer, fearing for his safety, tried to back up, but was unable to do so because of the crowd. The officer had his lights and sirens activated.

While trying to extricate himself from an unsafe position, the officer drove forward striking one individual and may have impacted others. The officer stopped at a point of safety and called for medical aid. One person was transported to an area hospital. That person’s condition is, at this time, unknown.

The incident has gone wildly viral on social media this morning. The first clip below has nearly 2 million views at this writing.

The press release for the incident at S. 9th and Pacific Avenue can be found at https://t.co/eXlPIFRekp
The Pierce County Force Investigation Team has taken over the investigation. All further updates will be available at https://t.co/iVEtvPe40D

@KING5Seattle @komonews @TacomaPD just witnessed a tacoma police officer run over a civilian while in pursuit of someone doing burnouts pic.twitter.com/oRHxhyiGBd