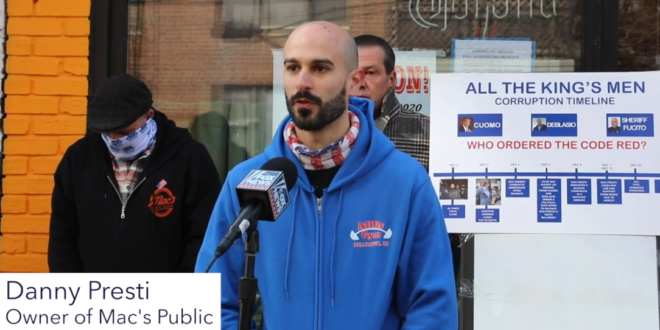 The co-owner of a Staten Island pub infamous for defying city and state COVID-19 health restrictions has avoided felony charges after he allegedly drove into a sheriff’s deputy who was trying to detain him outside his bar on December 6th.

But after hearing testimony from Presti, a Staten Island grand jury decided to charge him with only two misdemeanors for allegedly selling alcohol inside the bar, Mac’s Public House, without a license.

As I’ve previously reported, Presti has been lionized by Fox News, who provided live breathless coverage of lockdown protests outside the bar. The police officer in the incident suffered two broken legs.

.@NYCMayor said he’s “shocked” to hear a grand jury declined to indict Daniel Presti after a video shows him hitting a sheriff’s officer with his car.

“If you hit a law enforcement officer with a car, that’s profoundly troubling That should lead to an indictment,” @NYCMayor https://t.co/LmzNywimlh