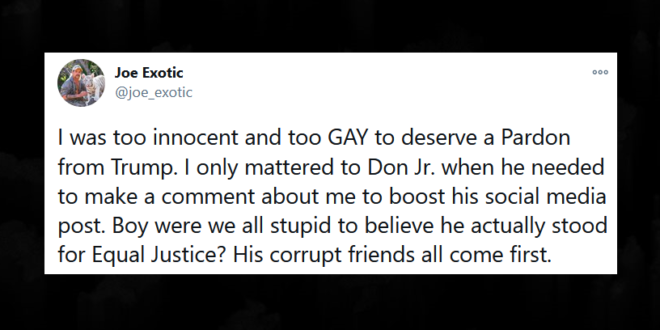 Tiger King Joe Exotic lashed out at former President Donald Trump after being passed over for a pardon on Wednesday — claiming he was denied for being “too gay” for the president.

Exotic, real name Joseph Allen Maldonado-Passage, released the statement on his Twitter account Wednesday afternoon, seething at Trump for refusing to commute his sentence in a murder-for-hire plot against his archrival, Carol Baskin.

Exotic has served a year of his more than 20-year sentence for attempting to hire a hitman to rub out Baskin. His supporters were so confident that he’d be included in Trump’s list of pardons and commutations that they rented a limousine to pick him up from prison Wednesday.

I was too innocent and too GAY to deserve a Pardon from Trump. I only mattered to Don Jr. when he needed to make a comment about me to boost his social media post. Boy were we all stupid to believe he actually stood for Equal Justice? His corrupt friends all come first. pic.twitter.com/ysGfwnqlHi

Previous Arnold Gets Vax: “Come With Me If You Want To Live”
Next LIVE VIDEO: Buttigieg Testifies At Confirmation Hearing