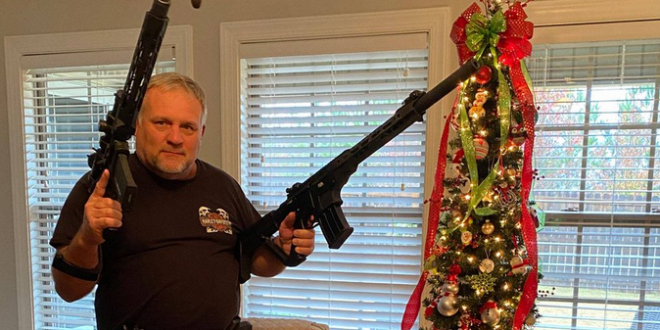 Snopes spoke with Kristi Greeson, the wife of the late Kevin Greeson, who told us that there was no truth to the allegation that her husband’s heart attack was the result of his accidentally tasing himself. Greeson said that her husband attended the Capitol riot but never entered the building.

“He just stopped talking, and I could hear all the people. That’s when he had the heart attack,” Greeson told Snopes over the phone. “He died instantly.”

“He had no guns. He had no tasers. He had no weapons. The only thing he had was a flagpole,” she said. “Forever and ever, my husband is going to be known as the guy who tasered his balls while stealing a painting and that could not be farther from the truth,” she told us.

Snopes also points a New York Times reporter who says he was near Gleeson when he fell to the ground.

Here’s a photo of Kevin Greeson – the 55-year-old Athens, Alabama, man who died of a “medical emergency” during the unrest in Washington yesterday – posted on Parler last month w/ the caption “I wish these motherfuckers would come to my hood!” pic.twitter.com/9jVC6Sdeh5

One of the people who died on Capitol grounds was Kevin Greeson. His wife told me he wanted to support Trump, wasn’t there to participate in the violence & didn’t condone it. His posts online show he has advocated for violence against Democrats in the past https://t.co/IPYP86uaVq

Previous Extremists Ramp Up Plans For Another DC Assault
Next US Attorney: Hundreds May Face Charges For Riot