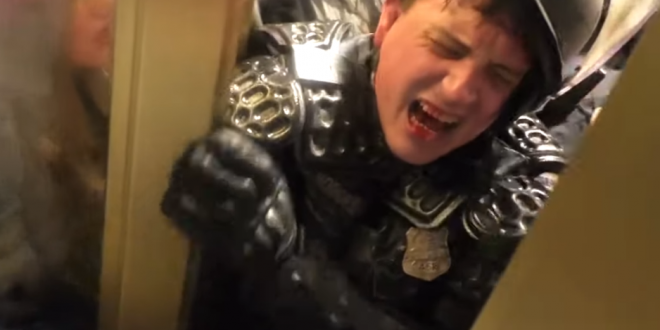 A horrifying video from Wednesday’s Capitol riots showed an officer crushed between waves of a pro-Trump mob and officers defending the building. During the confrontation, captured on video by investigative outlet Status Coup, one officer was pinned between a door and the masses of people.

At least one individual attempted to rip away the officer’s mask while he was wedged, as he screamed in agony. The video panned over to the rioters, who chanted, “Heave, ho! Heave, ho!” while pushing further into the entryway.

The officer reenters the frame of the video stuck in the same position, now maskless and bloodied, screaming for help. A voice can be heard amid the fray, yelling, “Let him back, let him out!”

The second clip is longer. Millions have viewed the first.

This is what the pro-Trump mob did to American law enforcement officers after the President incited a deadly riot at the U.S. Capitol