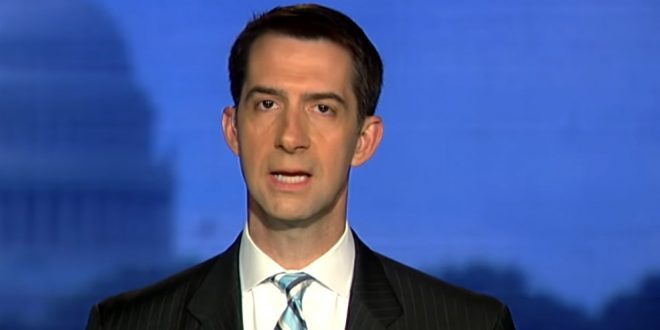 In his first run for Congress, Cotton leaned heavily on his military service, claiming to have been “a U.S. Army Ranger in Iraq and Afghanistan,” and, in a campaign ad, to have “volunteered to be an Army Ranger.”

In reality, Cotton was never part of the 75th Ranger Regiment, the elite unit that plans and conducts joint special military operations as part of the U.S. Army Special Operations Command.

Rather, Cotton attended the Ranger School, a two-month-long, small-unit tactical infantry course that literally anyone in the military is eligible attend. Soldiers who complete the course earn the right to wear the Ranger tab — a small arch that reads “Ranger” — but in the eyes of the military, that does not make them an actual Army Ranger.

Hey @SenTomCotton, unless you wore one of these berets you shouldn’t be calling yourself a Ranger.

“Arkansas senator has repeatedly said he served as “a U.S. Army Ranger in Iraq and Afghanistan.” That’s not true.”

Sen. Tom Cotton campaigned on his “experience as an Army Ranger” — but he didn’t have any https://t.co/Lz9o8FPv9z

Tom Cotton and I served at the same in the 3rd U.S. Infantry Regiment. I was enlisted. He was an officer. Let me tell you: if any of his fellow infantry officers had heard him claim he served as an Army Ranger (versus being Ranger-qualified), he’d have caught hell. Shame on him.

Not surprised that Tom Cotton lied about being an Army Ranger. I’m only surprised it took this long for people to find out about it.

Isn’t that STOLEN VALOR?
Shouldn’t he resign over it?

Tom Cotton lied about being a U.S. Army Ranger in Iraq and Afghanistan.

Madison Cawthorn lied being accepted to the Naval Academy and about being a Paralympian.

The Republican Fascist Party is the party of Stolen Valor.