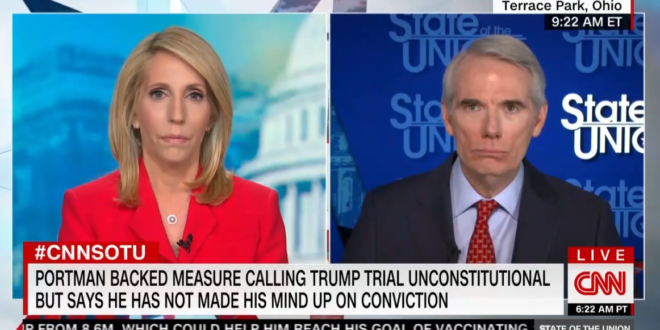 Rob Portman: Trump’s Behavior Can Be Inexcusable And Yet Not Be Subject To Conviction At Trial [VIDEO]

“I have said with regard to the president’s comments that day that they were partly responsible for what happened, for the horrible violence that occurred on Capitol Hill. I’ve also said that what he did was wrong and inexcusable.

“I’ve used the word inexcusable because that’s how I feel. It can be inexcusable and yet not be subject to a conviction after a president has left office.” – GOP Sen. Rob Portman, saying his vote this week was about about the trial’s constitutionality.

Portman was one of 45 GOP senators who voted for Rand Paul’s attempt to block the trial. Watch the clip.

Previous Kinzinger: The GOP Can’t Be A “Trump First” Party
Next Chris Wallace: The GOP Is More Outraged About Liz Cheney Than They Are About Their Loony QAnon Rep