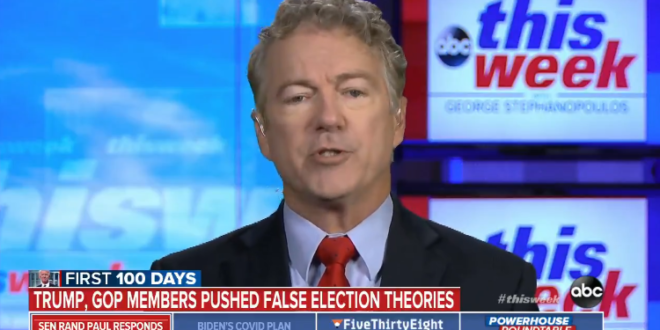 Senator Rand Paul refused to say the election was not stolen as ABC News’ George Stephanopoulos confronted him on This Week over the “big lie” pushed by the former president and his supporters.

Stephanopoulos started off by directly asking, “This election was not stolen. Do you accept that fact?” Paul dodged and said, “The debate over whether or not there was fraud should occur.”

Stephanopoulos also pointed out that even Bill Barr said the DOJ saw no widespread voter fraud. He again asked Paul, “Can’t you just say the words ‘this election was not stolen’?” Paul attempted to frame the debate as the media being unfair.

As you’ll see in the clip, Paul gets increasingly angry and turns to attacking Stephanopoulos personally, accusing him of “inserting yourself into the story.”

GS: “There are not two sides to this story. This has been looked at in every single state.” https://t.co/P6iz1jjwYE pic.twitter.com/GeWSYe0Bs0

Previous Birx: Some In Trump WH Thought COVID Is A “Hoax”
Next Davos Founder: Trump Likely Won’t Be Invited Back