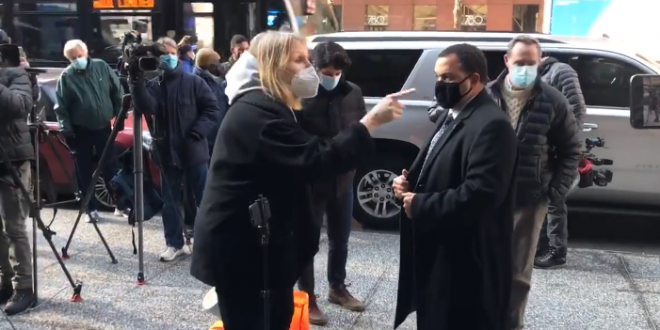 Minutes ago Sen. Chuck Schumer held a press conference outside his office on the Upper East Side of Manhattan to demand that last week’s rioters be permanently added to no-fly lists. Schumer was about two minutes into his statement when a screaming woman burst into view to yell abuse and declare that she was “sexually excited” by last week’s riots, “that’s how much I loathe you.” She also calls Schumer, who is Jewish, a “racist anti-Semite.” The woman goes on to threaten that “Trump supporters” will be coming to the homes of Schumer and Nancy Pelosi.

Watch a heckler interrupt Sen. Schumer’s address calling for the impeachment of Trump.pic.twitter.com/WYoq4TnqYN

And right before @MSNBC cut away from Schumer’s heckler, she very clearly said, “and I actually got sexually excited when I watched it.”

I assume she means the riots but fuck, that’s a new level of batshit if they’re turning the riot footage into wank material 😳

We need to talk more about the overlap between Trumpism and mental illness. What if this woman had had a weapon?https://t.co/jT1zLfNFI6