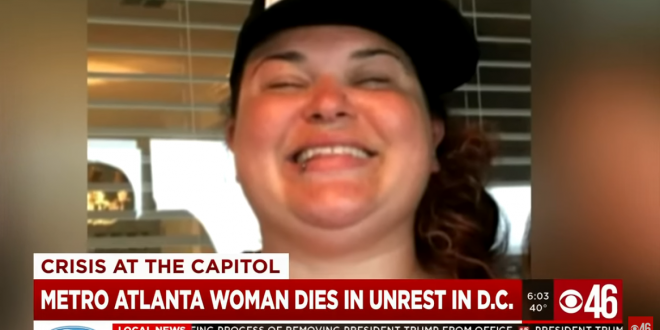 A woman who was reportedly trampled to death during a riot inside the U.S. Capitol was reportedly obsessed with the QAnon conspiracy theory, according to her friends and family. A photo shows that she carried a Gadsden “don’t tread on me” flag at a protest before the violent siege.

Rosanne Boyland, 34, was among four of President Donald Trump’s supporters who died Wednesday inside the Capitol after breaking inside to disrupt the congressional certification of Joe Biden’s win, and her family blames the president she fervently backed, reported WGCL-TV.

Boyland was knocked to the ground and crushed as crowds breached the Capitol, according to Axios, and suffered a fatal medical emergency.

What a shame. Rosanne Boyland should’ve used better judgment. Unfortunately, she was not a peaceful protester. If so, she would be alive today. Her carrying a “Don’t Tread on Me” flag and being trampled to death is pure irony at its finest. #TrumpIsACompleteFailure pic.twitter.com/xwbul5JUi4

Previous REPORT: Rioter Died After Tasering Himself In The Balls
Next WV Republican State Rep Charged In DC Riot [VIDEO]