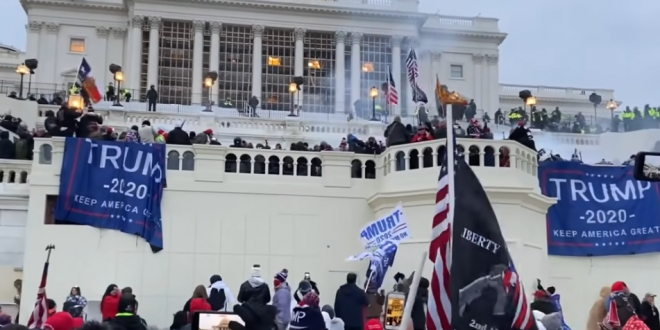 From the military site Task & Purpose:

A retired Air Force Reserve lieutenant colonel who was seen in pictures of insurrectionists storming the Senate floor on Jan. 6 has been charged by federal authorities, according to the Justice Department.

Larry Rendell Brock was arrested on Sunday in Texas, the U.S. Attorney’s Office for the District of Columbia has announced. Brock faces charges of violent entry and disorderly conduct on Capitol Grounds as well entering or remaining in any restricted building or grounds without lawful authority.

“It is alleged that Brock was identified as one of the individuals who unlawfully entered the U.S. Capitol wearing a green helmet, green tactical vest with patches, black and camo jacket, and beige pants holding a white flex cuff, which is used by law enforcement to restrain and/or detain subjects,” a U.S. Attorney’s Office news release says.

Their cases are being prosecuted by USAO of DC and the Counterterrorism Section of the DOJ’s National Security Division. pic.twitter.com/E9lZutQenb