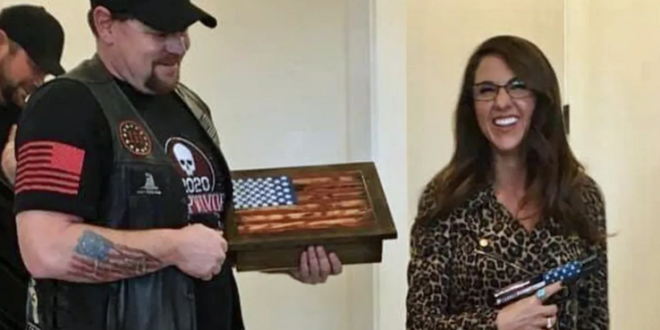 Rep. Lauren Boebert, R-Colo., received this weekend a custom-printed Glock 22 handgun with the congressional seal on the grip as an apparent gift from members of a group called “Boots on the Ground Bikers for Trump.” Boebert now says she does not currently have possession of the gun, perhaps because it’s a violation of House ethics rules for members to accept gifts worth more than $50.

Video posted to Facebook on Sunday shows group member Duke Everest presenting the gun to the freshman conservative at a private event in a Colorado living room with about two dozen people in attendance. Everest then gives Boebert a custom-printed magazine, and then from a separate drawer retrieves a box of bullets. “These are freedom seeds,” Everest says, drawing laughs.

Rep. @laurenboebert, criticized this morning for accepting a gift in violation of congressional gift limits, now says she will pay for the custom Glock she received. #copolitics #9News https://t.co/FekTbB1Rwf