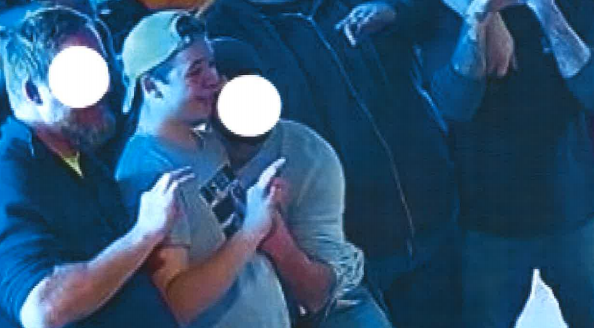 Kenosha County prosecutors are attempting to modify Kyle Rittenhouse’s bond agreement after they say the 18-year-old flashed white-power signs while posing for photos, drank several beers and was ‘loudly serenaded’ with the Proud Boys’ official song at a Mount Pleasant bar.

Rittenhouse, who is charged with shooting and killing two people and injuring a third during protests and unrest in Kenosha last summer, was released from Kenosha County Jail on a $2 million bond.

That bond agreement, in its current state, does not restrict Rittenhouse from entering a bar or drinking alcohol – as those underage are allowed to do in the company of parents in Wisconsin – nor does it stop him from fraternizing with known members of white supremacist groups.

Read the full article. There’s more photos of the bar party and you’ll see that Rittenhouse wore a t-shirt reading “Free As Fuck.”

Prosecutors are looking to modify Kyle Rittenhouse’s bail conditions after the Kenosha shooter flashed white power signs and was spotted out with Proud Boys https://t.co/jRrLNMDwzV via @Yahoo

Prosecutors are asking the Kenosha County Circuit Court to modify the bond conditions of Kyle Rittenhouse, who is facing homicide charges in the death of two men during protests, according to a motion filed by the Kenosha County District Attorney’s Office. https://t.co/KFHPJ8MgKs