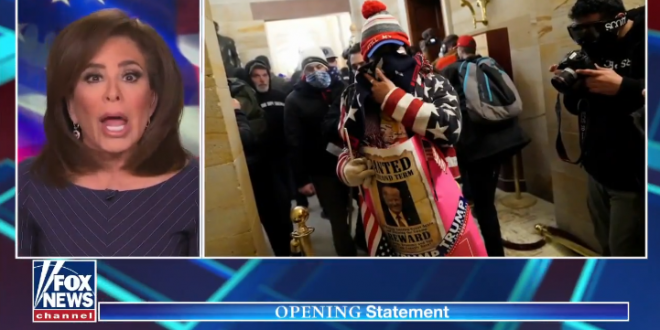 “I want to be clear. The actions at the United States Capitol three days ago were deplorable, reprehensible, outright criminal. These frightening and repulsive actions represent the most significant breach on our Capitol in over 200 years.

“And I don’t care with happened in the past and or whether those who did it think the election was stolen. That is not justification. Seventy-five million of us are still angry about the election, but we don’t storm the Capitol.

“And stop looking for other people to blame, including those dirt-bag terrorists antifa. To those of you who did this, you did it, of your own will, and you will be held accountable.

“Take the veil of politics off. Be totally objective, anyone watching this must condemn it.” – Fox News host Jeanine Pirro, on last night’s show.