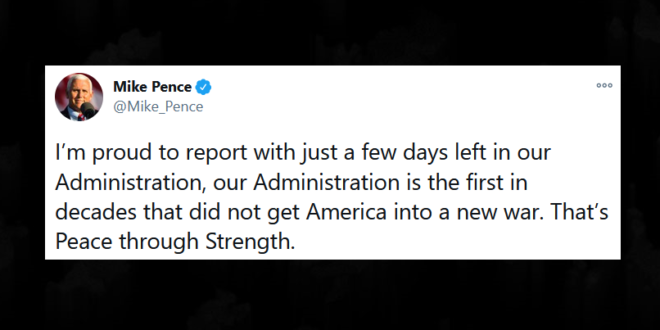 Pence’s Final Boast: Trump Never Got Us In A New War

Vice President Mike Pence on Sunday tried to brag about one of the supposed military accomplishments of President Donald Trump. It didn’t go well. Pence boasted that the Trump administration didn’t get in any new wars.

But as Pence’s critics quickly pointed out, the Trump administration is currently in a losing battle with the coronavirus, which has sickened nearly 24 million and killed close to 400,000 Americans.

There’s also another issue: Trump supporters stormed the U.S. Capitol earlier this month in a violent and deadly insurrection egged on by the president that turned the halls of Congress into a virtual war zone.

I’m proud to report with just a few days left in our Administration, our Administration is the first in decades that did not get America into a new war. That’s Peace through Strength. pic.twitter.com/uiSNxi67aT

Unfortunately there are 400,000 dead and there was an insurrection. Not sure i would be bragging

This is war.
This is your legacy. pic.twitter.com/IuJotLJ8pC

Mike. Come on, man. Your main dude sent his lynch mob for you. They were going to hang you. Do you not understand that? He’s a sadist, Mike. He would have enjoyed every minute of it. pic.twitter.com/2l5Lk71ozz