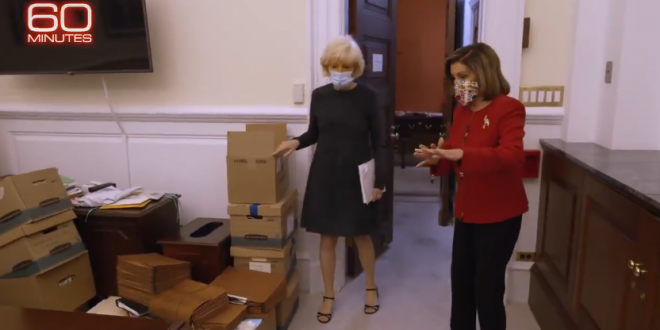 Pelosi: My Staff Cowered Under A Table For Hours

The mob was free to roam the halls of Congress, one group making it right up to Speaker Pelosi’s suite of offices. They smashed in one of the office doors before they went through to another door – behind which Pelosi’s staff cowered, terrorized.

“The staff went under the table, barricaded the door, turned out the lights, and were silent in the dark,” Pelosi said. “Under the table for two and a half hours.”

During this time in hiding, they listened to the invaders banging on that door – as could be heard on a recording from one of the staffers’ phones. Across the hall, a group broke into the speaker’s private office.

When a mob of Trump supporters stormed the Capitol, some made their way to Speaker Pelosi’s office. In a recording from one of Speaker Pelosi’s staffers, the invaders are heard banging on a door her staff had barricaded while they hid under a table. https://t.co/CNmQcAs9av pic.twitter.com/ymt3CI0hHi