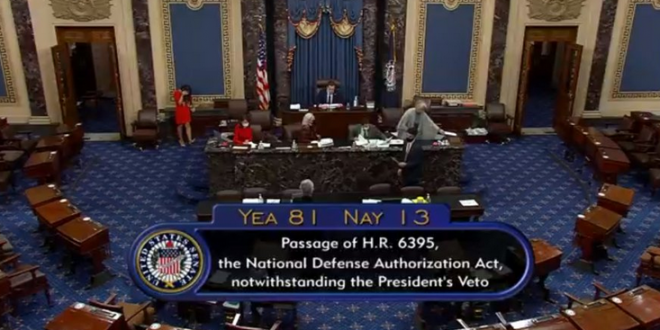 The Senate on Friday rejected President Donald Trump’s attempted derailment of the $740.5 billion defense bill that boosts pay and benefits for troops and adds care for thousands of Vietnam-era veterans who were exposed to Agent Orange.

In a 81-13 vote, the Senate overrode Trump’s veto of the 2021 National Defense Authorization Act, joining the House in delivering a bipartisan rebuke of the president in his final days in office.

It is the first and likely only veto of the Trump presidency. The NDAA sets annual spending and policy priorities for the Pentagon and originally passed both chambers of Congress earlier this month with veto-proof majorities.

We’re giving our troops a pay raise and stripping off the names of Confederate losers from their bases and even Congresional Republicans agreed with that. The NDAA veto override vote was 81-13.https://t.co/gmk4atcwnm

Congress overrides a Trump veto for the first time with Senate vote on defense bill https://t.co/SMceouKirR

Previous US Cases Doubled To 20 Million In Just 54 Days
Next Gohmert Filing Claims Pence Has Power To Decide The Winner, Otherwise He’s Just A “Glorified Letter-Opener”