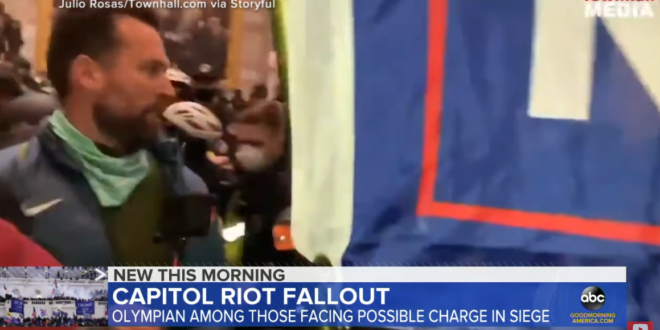 Klete Keller, a three-time U.S. Olympic swimmer and gold medalist, was criminally charged Wednesday with participating in the Capitol riot, where he was identified in a video showing him wearing his USA Swimming jacket.

Keller is charged with obstructing law enforcement, knowingly entering or remaining in a restricted building or grounds without lawful authority, and violent entry and disorderly conduct, according to a complaint in U.S. District Court in Washington, D.C.

UPDATE: Klete Keller, an Olympic gold medal swimmer who wore his U.S. team jacket to the Capitol riot, has also been arrested https://t.co/8C6f2QHiuH

Klete Keller allegedly wore his US Olympic Team jacket to the storming of the US Capitol. https://t.co/sFAxwb3gyO

Klete Keller, a two-time U.S. Olympic swimming gold medalist, was apparently among a mob of rioters who violently stormed the U.S. Capitol last week, according to video footage. The news was first reported by the swimming news site SwimSwam. https://t.co/qVpHTJYUVz