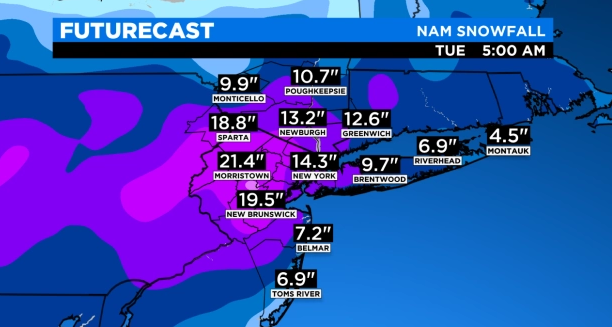 A long-lasting, major storm taking aim on the Northeast will bring between a foot and 18 inches of snowfall to much of the region, along with blizzard-like conditions, including strong, gusty winds. The storm is expected to develop late Sunday night, Jan. 31, and become heaviest in the afternoon on Monday, Feb. 1, and linger into Tuesday, Feb. 2.

“Travel could be very difficult to impossible,” the National Weather Service said in a Hazardous Weather Outlook statement issued Sunday morning. “The hazardous conditions could impact the morning and evening commute (on Monday). Gusty winds could bring down tree branches. Blizzard conditions are possible Monday and Monday evening.”

Gov. Cuomo directed state agencies to prepare all emergency response gear and promised to scrutinize the response of utility companies to any power outages. The storm was expected to wreak havoc on the Monday morning and evening rush hours, with travel throughout the region expected to turn dicey at best. At the storm’s peak, the snowfall could drop up to 2″ per hour.

Northern and central parts of New Jersey are now bracing for even more snow than originally projected as a major, prolonged nor’easter winter storm is expected to slam the state Sunday into Tuesday, possibly dropping up to 18 inches in some areas, according to updated forecasts.

Latest snowfall and ice accumulation forecasts for the upcoming winter storm. In addition, winds of 20-35 mph with gusts up to 40-50 mph are expected along the coast Monday and Tuesday, along with minor to locally moderate coastal flooding during high tides on Monday-Tuesday. pic.twitter.com/c1Wq0J4QZt

A major nor’easter will impact the Mid-Atlantic and Northeast through early next week. Widespread heavy snow accumulating to 8″+ is expected, with isolated totals of 18″+ possible. Freezing rain is also likely in NC, VA, and WV. pic.twitter.com/x16c0tNCHY

Dangerous storm for NYC. Very rough Noon to 8pm on Monday. New data comes out near Noon. May have to raise totals. Right now, most of NYC will see at least 10″. pic.twitter.com/jtLRE5iPLQ

Winter storm warnings were in effect Sunday from western North Carolina to northeastern Pennsylvania and northern New Jersey, including several major cities, as millions of Americans braced for an approaching nor’easter: https://t.co/QIGjxJdoyY pic.twitter.com/gOT20DG6hl

We are getting ready for the snow. Due to nature of this storm, our brine trucks will be out this evening to apply liquid salt to some roadways/bike lanes. Brine is spread only before precipitation begins on dry streets & forms a barrier to help keep snow/ice from accumulating. pic.twitter.com/otZAl8Tp3p

Tracking our next #noreaster, with heavy wet snowfall expected for much of the area and rain for some. Wind gusts up to 60mph will be possible, bringing a risk for power outages too. #wcvb #WinterStormWatch #HighWindWatch pic.twitter.com/ZM4oDTP2P9