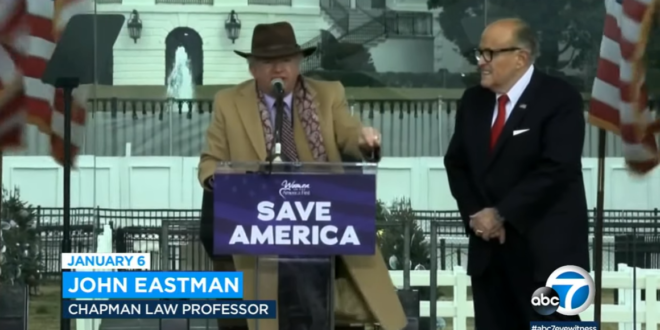 A law professor and attorney for President Donald Trump who repeatedly said the 2020 election was rigged and spoke at the rally that immediately preceded last week’s riots at the U.S. Capitol baselessly blamed the violent insurrection on “Antifa” on Wednesday.

Chapman University law professor John Eastman, who last year spawned the birther theory that Kamala Harris was constitutionally prohibited from serving as vice president, was the target of backlash after appearing with Rudy Giuliani at Trump’s Jan. 6 “Stop the Steal” protest. There, Eastman said President-elect Joe Biden’s victory was illegitimate.

In an emailed response, Eastman said his claims are backed up by evidence, and that the breach at the Capitol was instigated by the leftist, anti-fascist group known as antifa.

“Without bothering to check with me about the evidence I have to support every statement I made, they simply made scurrilous, defamatory, and unfounded claims that my statements had no basis in law or fact,” Eastman wrote.

There has been no evidence of widespread voter fraud in the presidential election, nor that leftist extremist groups led the violence at the Capitol last week.

At the second link above you’ll see that Eastman’s colleagues are having no success in getting him fired from Chapman University.

It was Eastman who was behind Texas AG Ken Paxton’s failed Supreme Court attempt to overturn the election results in swing states.

Longtime JMG readers will recall Eastman’s many, many attacks on LGBTQ rights as chairman of NOM, a position he still holds.

In 2015, he wrote that he hoped that former Kentucky clerk Kim Davis’s defiance would ignite a wave of revolt against “lawless” same-sex marriage.