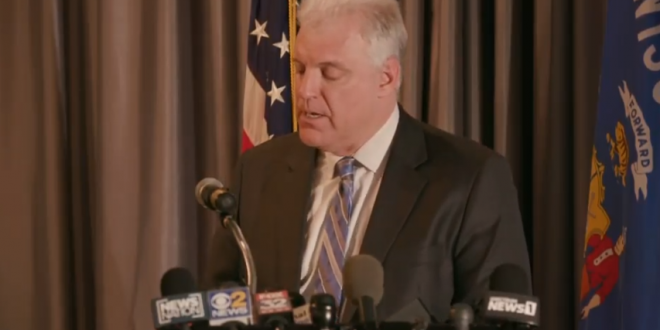 No Charges For Kenosha Cops In Jacob Blake Shooting

The police officers involved in the shooting of Jacob Blake, which touched off days of civil unrest this past summer in Wisconsin, will not face any criminal charges, Kenosha County District Attorney Michael Graveley [photo] announced Tuesday.

Blake, who is Black, was struck by seven bullets at close range on Aug. 23 as he walked away from Kenosha police officer Rusten Sheskey, who had answered a domestic disturbance call. Graveley said he shared his findings with Blake before speaking to reporters late Tuesday afternoon.

Even before announcing his findings, Graveley pleaded for peace. “Can moments of tragedy like this be an opportunity to build things?” he said at the press conference. The shooting left Blake paralyzed below the waist, according to his family.

And in very related news…

Kyle Rittenhouse, 18, entered his not guilty plea in a brief hearing conducted by teleconference Tuesday.https://t.co/x10l3hkjcy