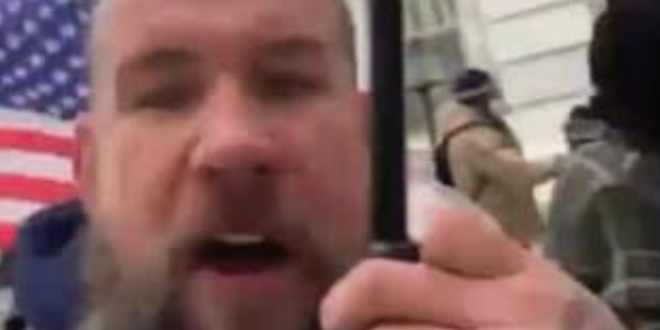 A New Jersey gym owner and former ultimate fighter who got attention for defying the COVID lockdown was arrested for his role in the Capitol riot on Friday after several people identified him to the FBI, according to court papers.

Scott Kevin Fairlamb of Stockholm, N.J., who fought under the name “Wildman,” was charged in federal court in Washington, D.C., with assaulting a federal officer and carrying a dangerous weapon, according to documents.

At least one person submitted a video that allegedly showed Fairlamb shove and punch an officer on the West Front of the Capitol. Another showed him on the scaffolding outside the Capitol, and an officer’s body cam shows him standing in the crowd wearing camouflage jacket and red shoes.

Cop’s Son Who Punched Officer In Capitol Attack Has A Brother In The Secret Service https://t.co/viP2tEoX2C via @Yahoo

A concerned citizen sent authorities a video with this image of Scott Kevin Fairlamb allegedly punching an officer during the Capitol siege, the FBI says.

“What do Patriots do? We fuckin’ disarm them and then we storm the fuckin’ Capitol,” Fairlamb’s quoted saying in a 2nd vid. pic.twitter.com/1upRwhyM9f

A rioter arrested for punching a D.C. police officer during the Capitol insurrection is the son of a New Jersey trooper and the brother of a member of the Secret Service. https://t.co/eHG4hzisYV