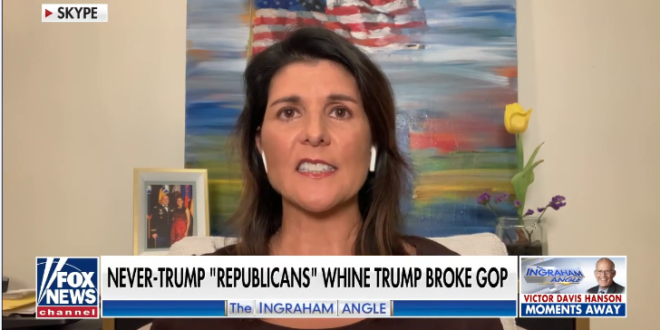 Nikki Haley: Trump’s Actions Since Election Day “Were Not His Finest, But Give The Man A Break, Move On”

“January 6th was a tough day. The actions of the president since Election Day were not his finest.

“It troubles me greatly because I am proud of the successes of the Trump Administration. Those were the right policies.

“That’s what our party cares about and is looking to do. If you look at the foreign policy side, the strength we were able to show was really important.

“The actions of the president post-Election Day were not great. What happened on January 6th was not great. Does he deserve to be impeached? Absolutely not.

“I don’t think there is a basis for impeachment. The idea that there — they didn’t even have a hearing in the House.

They will bring about impeachment, yet they say they are for unity. They beat him up before he got into office.

“They are beating him up after he leaves office. At some point, give the man a break. I mean, move on.” – Nikki Haley, last night on Laura Ingraham’s show.

Nikki Haley: I don’t even think there’s a basis for impeachment… Now they’re going to turn around and bring about impeachment yet they say they’re for unity… I mean at some point I mean give the man a break. I mean move on… pic.twitter.com/IqnZrIDIY0

Previous Giuliani To Dominion: “Do You Think I’m A Jackass?”
Next Court: NFL Owner Sex Sting Tapes Must Be Destroyed