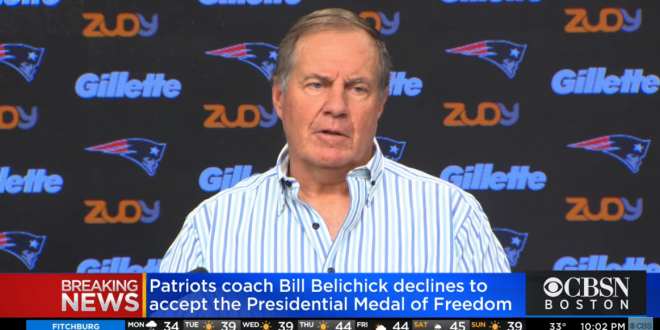 New England Patriots coach Bill Belichick said Monday he will not “move forward” with the Presidential Medal of Freedom that Donald Trump planned to present to him on Thursday. Belichick explained his decision in a statement.

“Recently I was offered the opportunity to receive the Presidential Medal of Freedom, which I was flattered by out of respect for what the honor represents and admiration for prior recipients. Subsequently, the tragic events of last week occurred and the decision has been made not to move forward with the award.”

Trump recently has selected several sports figures and political backers for the honor. Hall of Fame golfers Annika Sorenstam and Gary Player, along with the late multisport athlete Babe Didrikson Zaharias, received the Presidential Medal of Freedom on Thursday, the day after the riot at the Capitol.