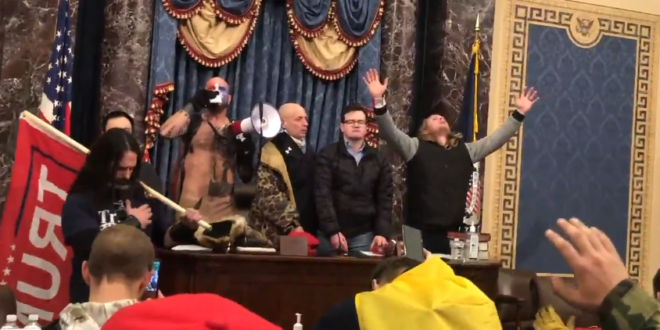 When Luke Mogelson attended President Donald Trump’s speech on the National Mall, in Washington, D.C., on January 6th, he was prepared for the possibility that violence might erupt that day.

Mogelson, a veteran war correspondent and a contributing writer at The New Yorker, had spent the previous ten months reporting on the radical fringe of Trump supporters, from anti-lockdown militias to fascist groups such as the Proud Boys.

After Trump’s incendiary speech, Mogelson followed the President’s supporters as they forced their way into the U.S. Capitol, using his phone’s camera as a reporter’s notebook. What follows is a video that includes some of that raw footage.

Read the full article. Also read Mogelson’s first-hand account of what he witnessed. The video below is really something. As you can see in the screenshot above, they took a moment to gather on the Senate dais and pray for help from Jesus.

“I think Cruz would want us to do this so I think we’re good,” says one of the terrorists in this @NewYorker videohttps://t.co/Qli1CybPTT

NEW from next week’s issue of @newyorker: Luke Mogelson, who has been reporting on MAGA protesters for months, provides a firsthand account of the Capitol invasion. https://t.co/nmJyS5GMSP

Previous Ben Sasse: QAnon Will Destroy The GOP From Within
Next Producer/Killer Phil Spector Dies In Prison At Age 80