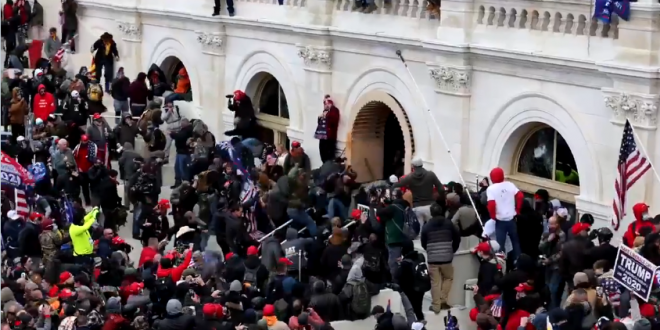 As a mob of pro-Trump rioters attacked the Capitol on Wednesday, one man in a white hat and backpack grabbed a police officer by the helmet, dragging the officer down the stairs. Soon, other rioters kicked and punched the officer, and one man even bashed the prone figure repeatedly with a pole flying an American flag.

The shocking violence against an outnumbered officer is shown in a video first aired by CNN on Sunday and which swiftly went viral, garnering more than 1.6 million views on Twitter by early Monday.

The officer seen in the video, as well as in other photos and videos of the moment that later surfaced on social media, has not been officially identified. It’s also not clear the extent of the injuries the officer suffered in the attack.

Horrific new video obtained by CNN shows a MAGA rioter (in white hat and backpack) grab a DC Metro officer and pull him down Capitol steps where he is stomped and beaten with an American flag pole.
At one point they sing the Star Spangled Banner pic.twitter.com/XXJMxanGXp

Worth remembering that during his speech, Trump knew Pence was about to defy his election-snatching wishes but only turned on him AFTER the mob had breached the Capitol.

His tweet landed as Pence was being whisked out of the Senate chamber at 2:15.

Acting chief of the DC Metropolitan Police Department Robert Contee said at a press conference Thursday that 56 officers were injured and one was hospitalized after he was dragged into the crowd, beaten, kicked, and shocked with a stun gun.

This must be that officer.