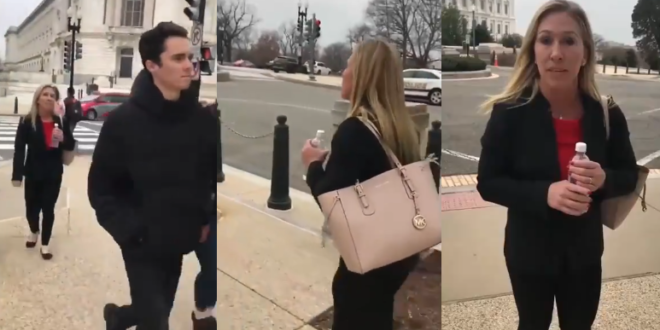 Last week Greene faced calls to resign from the survivors of the Parkland shooting survivors after Media Matters reported she agreed with comments calling the 2018 shooting a “false flag” operation, which refers to acts that are designed by perpetrators to be made to look like they were carried out by other individuals or groups. CNN’s KFile found additional comments from Greene where she called David Hogg, a survivor and activist, “#littleHitler” and spread a conspiracy that he was a “bought and paid little pawn” and actor.

.@mtgreenee, is this you harassing @davidhogg111 weeks after the Parkland shooting, that my daughter was killed in & he was in? Calling him a coward for ignoring your insanity. I will answer all of your questions in person. Get ready to record again.pic.twitter.com/aQjL74x7kh

Here’s the full 2 minute 48 second video of Marjorie Taylor Greene trolling @davidhogg111 like the deeply unserious person she is.

This was before she ran for Congress and is on her YouTube page.

In the video, she wonders why Hogg gets to meet with US Senators and she doesn’t. pic.twitter.com/Q2Q0ZahU23

Previous Proud Boys Leader Was Once An Informant For Feds
Next UPDATE: Senate Panel Advances Buttigieg In 21-3 Vote