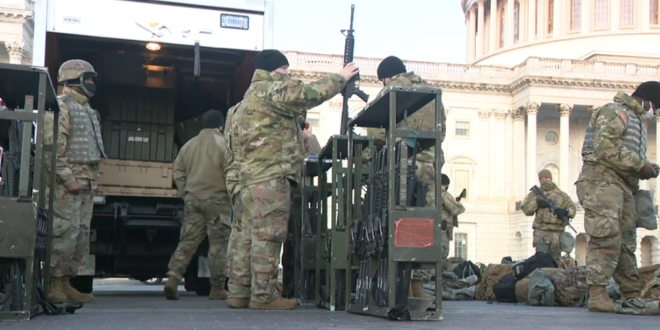 National Guard To Remain In DC Through March 31st

The deployment for the entire D.C. National Guard has been extended until March 31 in anticipation of “civil disturbance” throughout the nation’s capital, according to a memo obtained by POLITICO on Tuesday. The extended deployment was confirmed by a National Guard spokesperson.

The new orders suggest that law enforcement agencies in the nation’s capital are preparing for potential unrest in the coming days and weeks, as former President Donald Trump’s impeachment trial kicks off and his supporters issue threats to lawmakers.

In addition to the D.C. Guard, troops from Maryland have been ordered to remain on duty through at least March 15. The National Guard Bureau initially said the orders will become voluntary after 31 days, but Guard sources said Tuesday that was not the case.

Scoop: The DC National Guard is having its deployment extended until March 31 in anticipation of “civil disturbance” throughout the nation’s capital, according to a memo we obtained. Comes as Guard units are seeing Covid positivity rates of 10-15%. https://t.co/SezAbQtJeS