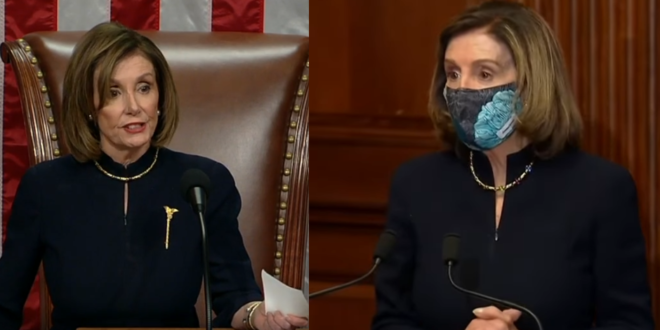 Nancy Pelosi Has An Outfit Just For Impeachments

Pelosi’s office confirmed to PEOPLE that the outfit worn by Pelosi on Wednesday is the same one worn on Dec. 18, 2019, when she presided over the House impeachment of Trump after the president withheld some $400 million in military aid from Ukraine while he pushed Ukraine’s president to dig up dirt on Joe Biden and Biden’s family.

Pelosi’s dark, two-piece skirt suit was paired with a gold necklace and floral face mask on Monday. Missing from the outfit was a brooch worn in 2019, designed to mimic a ceremonial mace, a symbol of legislative power

House Speaker Nancy Pelosi just joined the outfit repeating club, while impeaching Donald Trump on one charge of “incitement of insurrection.”
In December 2019, Pelosi put on this same black suit when Trump was impeached in the House for the first time. https://t.co/RuMJZF3bAI

Previous Trump Lies In New Statement: “No True Supporter Of Mine Could Ever Endorse Political Violence” [VIDEO]
Next Trump Permanently Banned By Teen Favorite Snapchat