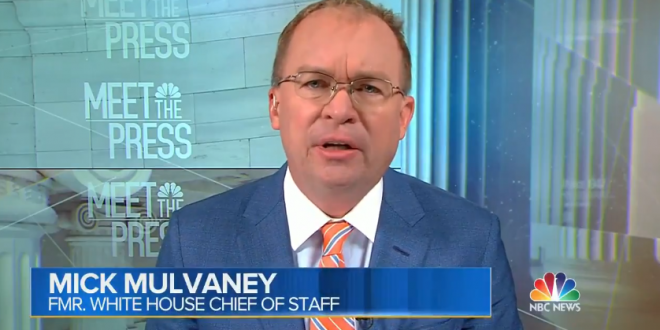 Mulvaney said Sunday that “people took (Trump) literally” when he encouraged his supporters to “stop the steal” and to go to the U.S. Capitol building to express their dissatisfaction. “I never thought I’d see that,” Mulvaney said.

Mulvaney claims on @MeetthePress that it took the attack of Wednesday for him to see the actual truth about Trump. How stupid does he think Americans are?

Fox’s Chris Wallace: “Do you feel any responsibility for enabling Donald Trump?”

Former Chief of Staff Mick Mulvaney: “… I’ve seen the president be presidential before, and I know that he has the ability to do it. He did it every single day. I don’t know what’s different …” pic.twitter.com/AM9NAhpq2C

WATCH: @MickMulvaney says he doesn’t know “what’s going on inside the Oval Office now and … inside the president’s head” after resigning from his position within the Trump administration. #MTP

Mulvaney: “Wednesday was a fundamental threat to the United States.” pic.twitter.com/ivbwf0iP7q