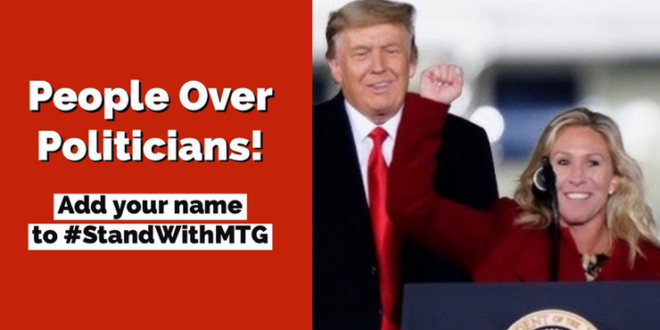 The mother of one of the victims of the 2018 Parkland school shooting, said she spoke to Rep. Marjorie Taylor Greene, R-Ga., after the freshman lawmaker was hit with widespread backlash last week for outlandish comments she made on social media, including one suggesting the shooting was a “false flag.”

According to Linda Beigel Schulman, whose son, Scott Beigel, was killed in the attack, Greene said does not believe major school shootings from the past decade were either false flags or staged. But, Schulman said, Greene declined to join her to publicly disavow them alongside her on MSNBC.

Read the full article. Meanwhile Lady Loony Tunes is exploiting her infamy by asking people to hand over their contact details in a move masked as a pledge of support. I certainly hope none of you sign up with obscene fake names.

The radical Democrat mob and their spokesmen in the Fake News Media are trying to take me out because I refuse to apologize for our America First values.

Will you sign your #StandWithMTG statement of support to show them the People have my back?https://t.co/kxg6ethfwD