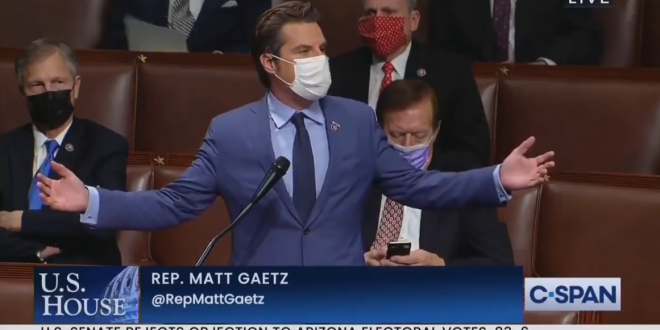 Moonie Paper Made Up “Antifa” Claim Cited By Gaetz

On the House floor early on Thursday, hours after a violent, pro-Trump mob burst into the Capitol, Rep. Matt Gaetz (R-Fla.) expressed his anger at the perpetrators. But Gaetz wasn’t pointing the finger at fellow Trump supporters — instead, he suggested members of antifa had secretly infiltrated the group to cause the chaos.

Citing a widely contested article published by the Washington Times, Gaetz admitted he does not know “if the reports are true.” But, he said to audible boos, “some of the people who breached the Capitol today were not Trump supporters. They were masquerading as Trump supporters and in fact, were members of the violent terrorist group antifa.”

And here’s where it all falls apart:

The article was based entirely on an interview with an anonymous “retired military officer” who claimed to have seen XRVision data that proved two of the rioters were members of “Philadelphia Antifa.” The story didn’t include any pictures of the supposed antifa infiltrators or other evidence.

But XRVision, the company at the center of the story, says the Times story is totally made up. In a statement provided by the company’s attorney, XRVision said its facial recognition software had in fact identified two neo-Nazis and a QAnon supporter.

Previous Rush Limbaugh: Stop “Calling For The End Of Violence”
Next Simon & Schuster Cancels Josh Hawley’s Coming Book “After His Role In A Dangerous Threat To Democracy”