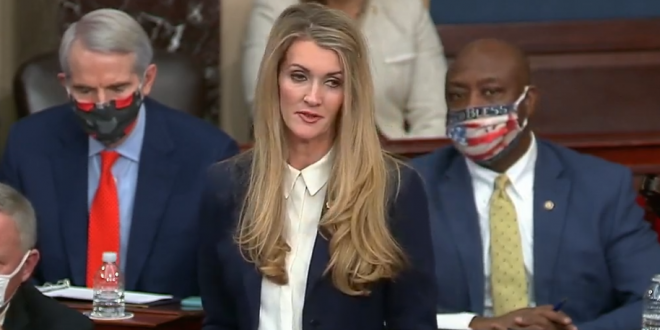 After appearing at a Trump rally just two days ago, tonight soon to be ex-Sen. Kelly Loeffler announced that in light of today’s events, she will no longer object to certifying the Electoral College. Other GOP senators, including Steve Daines and James Lankford, are dropping their objections as well. It’s possible that all this performative bullshit will fall away entirely thanks to today’s unprecedented rioting.

I told you. Suddenly here’s a bunch of Republicans who’ve been sucking Trump’s dick for the last 4 years, suddenly all, Oh, I never liked Trump, I didn’t support him, I just want to work with my colleagues, respectfully, never liked that Trump guy. Trump who? Never heard of him.

This actually rouses my core temperature to five trillion degrees Kelvin more than the initial “objection”.

These motherfuckers incited terrorism in the United States Capitol as a performance.

And now they abandon the act because it was never more. https://t.co/DxjjiJpB2E

Republican Senators Steve Daines and James Lankford say they will now vote to certify the election results. Calling Wednesday’s insurrection “a sad day for our country”.

BREAKING: Sen. Kelly Loeffler: “When I arrived in Washington this morning, I fully intended to object to the certification of the electoral votes. However, the events that have transpired today have forced me to reconsider and I cannot now, in good conscience, object.” pic.twitter.com/IBxqsasylN

Previous Obama On Rioting: Republicans Can Continue To “Stoke Raging Fires” Of Trumpism Or They Can Chose America
Next WaPo Board: Trump Must Be Removed Immediately