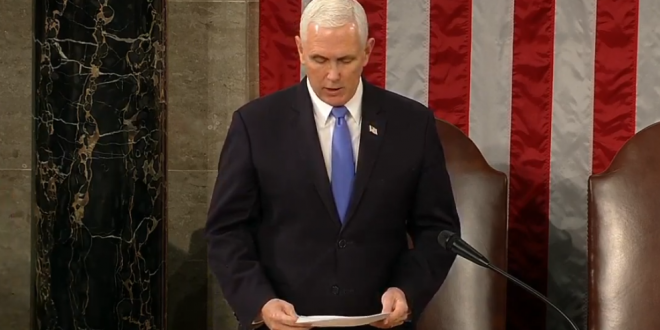 The House and Senate will convene Wednesday at 1 p.m. for a joint session of Congress to tally electoral votes from all 50 states and the District of Columbia, confirming President-elect Joe Biden’s victory in the presidential election over expected challenges from Republicans that could lengthen the proceedings.

Required under the Constitution, the meeting is typically a ceremonial affair, marking the final step in the electoral process before the presidential inauguration on January 20. But this year’s session is expected to be far from routine.

A coalition of Republicans from both chambers will try to reverse some states’ election results over alleged election irregularities, while outside the halls of Congress, President Trump’s supporters are set to descend on the nation’s capital to make their final push to keep him in office.

They will then give their tallies to Pence, who will announce the results and listen for objections.  If there are objections, the House and Senate consider them separately to decide how to count those votes. There are 538 electoral votes — one for each congressperson and senator plus three for Washington, DC.