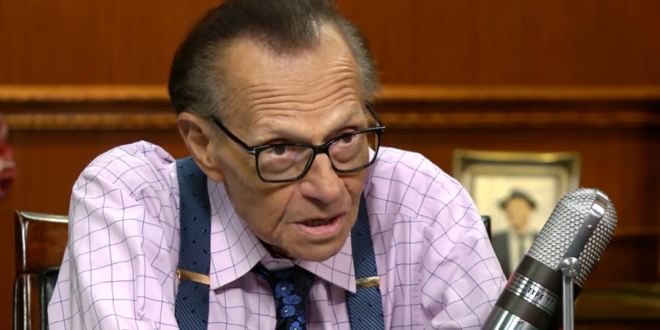 Larry King, the award-winning TV and radio host who became a household name with his long-running CNN show Larry King Live, died Saturday morning at the age of 87.

“With profound sadness, Ora Media announces the death of our co-founder, host, and friend Larry King, who passed away this morning at age 87 at Cedars-Sinai Medical Center in Los Angeles,” King’s official Twitter announced Saturday morning.

No cause of death was provided, but King’s death came weeks after it was revealed that the 87-year-old host was battling coronavirus. The Brooklyn-born King began his career in the late 1950s as a newspaper journalist and Miami DJ before expanding his radio repertoire to celebrity interviews and sporting event commentary.

Larry King, the award-winning TV and radio host who became a household name with his long-running CNN show ‘Larry King Live,’ has died at the age of 87 https://t.co/LcGgGtMfjt

Broadcasting legend and longtime CNN host Larry King has passed away. He will be missed by so many CNN employees past and present. #RIPLarryKing https://t.co/Ruu8hEOLdu

Legendary broadcaster Larry King has died. He was a fixture on television and radio, and for decades he hosted an interview show on CNN. King was recently hospitalized for symptoms related to Covid-19. pic.twitter.com/MVQyvnIApr